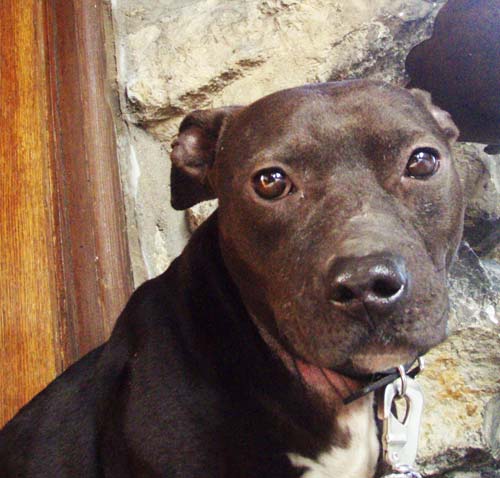 I apologize for sending more than one email. Yahoo seems to be picky when it comes to sending both pictures, and videos. Pffft!

Last night, while playing on my husband’s laptop, I found where he saved Brent’s story about how we adopted Boomer in his web browser. He saves it, because he loves to tell people Boomer’s story Forever Home.

And with every story, especially Boomer’s, I thought a few more pages needed to be “written” for the Boomer fans out there.

It’s been a year and a half since Boomer went on his 12 day “camping trip” last year. He disappeared last June when something startled him and he bolted out our front door while my husband was trying to get our Bassetts leashed to go outside. Let me tell you, those were the worst 12 days ever. He and I both felt horrible, because we had just adopted Boomer in April, and now he gets away from us in June. Add to that, as you know, Boomer is very “special” in the sense of his PTSD…so not only was he lost in a foreign area to himself, but having no sense of being able to defend himself, scared of every noise, every leaf that blow in the wind, and every tree branch that moves – we were beside ourselves.

Long story short, we were able to find him, and if it wasn’t for the determination and help of yourselves, and a bunch of Boomer family, friends, and fans, we may never have found him. Since he’s been home, I have seen some really great changes in him.

We’ve had to make a few changes ourselves.

I have to be cautious of our flag that hangs on our porch. Not because Boomer is un-patriotic, but because it hangs higher than the level of his head, and the slightest breeze makes it move. This makes him very, very nervous. BUT – After introducing it to him, and putting it down on his level where he can sniff and investigate, and us humans walking outside ahead of him (on a leash, of course) – he is now used to it and doesn’t duck for cover as soon as he sees it when the front door opens.

The dog leashes hang on a shelf against our wall. As long as we “talk” to him and tell him that he is ok, and he knows they aren’t going to fall off the wall and get him somehow…he sleeps more comfortably in his kennel. He is now aware that the ceiling fan in the living room isn’t going to jump out and get him, either.

Along the way, we have discovered that Boomer eats best if he can eat in his kennel, with the door closed. This eases his “flight” fear (I don’t think he has the “fight” mechanism in him at all) and he doesn’t worry about my two Bassetts stealing his dinner. They’ve done it before, ever so politely, and he just let them have it.

So we had to make an alternate plan. My Bassetts are hogs. ;-)

He has become more adventerous around the house as well. Primarily, Boomer never leaves our front room or dining area. We have a 3 bedroom house, but he won’t go in any of those rooms unless the Bassetts, and the humans are in there. And that takes some serious coaxing. In the living room, he can park himself up against a wall, and see everyone coming from any angle. Or, he likes to loaf in the recliner with my husband and either watch football or NASCAR. (“Man time.”)

He still does not like going outside, because of being “open and exposed.” BUT – I am sooooo glad to say that over the last few weeks, he has proactively gone up to the front door with the Bassetts to go outside. This is stunning and I am so excited about this! He only does it when he really, really needs to go outside, and still stands there and shakes, but he swallows his fear and stands at the door.

In fact, over the past three months or so, Boomer has started to actually GREET PEOPLE who come to visit at our front door! But it’s only a select few, such as myself, my husband, and my mother…who is a huge Boomer fan and loves hearing about his adaptations and “improvements” in her grand-dog. (Plus, it never hurts that “Nana” brings cookies when she comes to visit…Ha ha ha.)

Boomer has also grown when it comes to going for walks outside. In one video, he has actually started to ease up in his defensiveness…and will actually wag his tail a bit when we’re outside.

He has even proactively approached a few fenced-in neighbor dogs on a few occasions when we’re out, too. And wags his tail when he does it.

My husband has been gone since June for school with the Air Force, and just got back two weeks ago. I was so worried and afraid that Boomer was going to go in reverse in acclimating to him being home again. Instead, he has surprised me, and warmed back up to my husband. I am so thankful that my husband is a patient, understanding man with Boomer and his PTSD.

Boomer is exceptionally special to us with his condition. I say this because several of our close friends are Air Force and Marine Vets who have PTSD as well. Whenever THEY come over to visit, they ALWAYS ask how Boomer is doing. They have shared with me things about their conditions, which in turn helps Gordon and I work with Boomer through his.

Humans and animals with PTSD usually have very similiar symptoms…which is why Vets usually do so much better with PTSD service dogs. So, I got to thinking one night…why not figure out how to become Boomer’s “Service Humans?” We’re trying our best.

Anyone who comes to my house knows Boomer before they even walk in our door. They know about his personality, and are heartbroke by his startings in life. They know that they need to get down on his level and let him proactively approach them. They know that when he comes outside to join us on the front porch in the summer evenings, that when Gordon or I open the front door, everyone needs to be still and give him a chance to acclimate and get comfortable on a lap somewhere.

If we need to have someone come by and let our dogs out for us, we give them a complete run down on how to approach him and keep his leash tight when letting him back in the house…otherwise, he panics and will try to go crashing through it. They’re given a complete lesson in the ‘World of Boomer.’

Oh! And I’ve been working on getting him to “speak” for meal time. I wanted him to learn to bark to communicate. He has learned exceptionally fast, and can *almost* do it entirely without being asked to. Sometimes, he’d just prefer to “sing” for it instead. ;-) And I’m ok with that…cause it’s one of the most awesome songs in the world.

Frankie is getting better!!!
Scroll to top