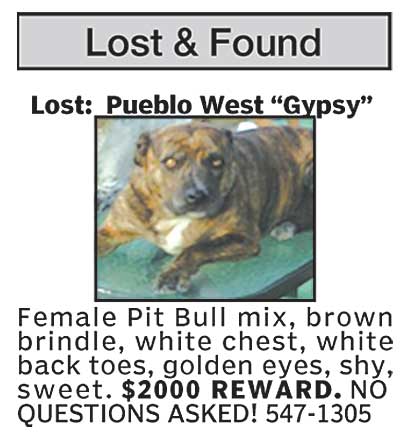 By SCOTT SMITH
THE PUEBLO CHIEFTAIN

Hannelore Lode’s home is full of life and love: There are dogs snoozing on the deck, curious cats on patrol, squawking parrots, ponds filled with koi, a forest of jungle-worthy houseplants — and hope. Lots of hope.

There’s hope peeking out from behind her couch: a stack of lost-dog posters.  There’s hope neatly stacked, 2 inches high in the center of her coffee table: a monumental two years’ worth of lost-dog newspaper ads.  There’s hope strewn everywhere: lost-dog fliers, old photos and a thick file of possible leads — phone numbers, addresses, notes and sleuthing results.  And there’s hope in Lode’s clear blue eyes.
“I hope for the best,” she says.
“That’s all I can do.”

A sudden loss.
Two years ago today, Lode’s dog Gypsy ran away from home. A horrific windstorm battered the pet owner’s Pueblo West neighborhood, ripping open the gate to her wall-enclosed backyard and allowing her dogs to briefly escape. All but one came home: Gypsy, a golden-eyed, happy-tailed, brindle-coated American Staffordshire terrier mix.

Lode immediately began her search.
She walked, she called, she drove around. No luck. The next day, she placed an advertisement in the lost-and-found portion of The Pueblo Chieftain’s classified section. And she’s been looking for Gypsy — and paying for near-daily ads in The Chieftain — ever since.

Understand that this quest is not a casual endeavor for Lode, 67. It’s an all-encompassing crusade. She has spent thousands of dollars on newspaper ads (she also regularly advertises in the Westcliffe and Canon City papers) and laminated fliers; driven thousands of miles throughout Southern Colorado while checking out every call and clue; and probably shed thousands of tears over her missing companion.

Lode, aided by friends and family, has investigated every tip generated by her ads — and there have been dozens.

But they all have led to dead ends. The dog in question is the wrong color, the wrong breed, the wrong gender, at the wrong address, in the wrong town.

And the calls have ranged from helpful (one pit bull rescue organization in Indiana checked out a lead in its area) to cruel (“I had your dumb dog.” Click.) Lode’s investigations have taken her from Walsenburg to Colorado Springs, from Beulah to Boone, to puppy mills and rescue shelters, to farms, mountain homes and suburban neighborhoods.

She has exhumed bodies, examined skeletons in the prairie and taken bones in for identification — but still no sign of Gypsy.

On the trail
So where is Lode’s beloved companion?

Is she living with a man in a cabin near Westcliffe — a replacement for his dog that was killed by a mountain lion?

Was she the stray dog on the other side of the fence in Colorado Springs that desperately wanted to join the owner’s pets in their backyard?

Was she the brown pit bull found in a box with its head bashed in?

Nobody knows — and those are just a few of the stories she has explored.

Meanwhile, Lode continues to listen, search and hope. She has even used the services of the Gurney Institute of Animal Communication, which claims to be able to locate and “speak” with missing pets. No definitive answers there, either.

“I just don’t know (what happened to Gypsy),” she says. “And that bothers me the most.” “I love them all”

She gets calls every week and continues to follow every lead, no matter how old or unlikely —

“I’m on the road almost every day,” she says.

Lode spends much of her time returning calls and sending emails, driving to spots where Gypsy may have been sighted and posting and re-posting fliers in veterinary clinics, firehouses, schools and other public places.

She knows that some might view her behavior as over-the-top obsessive.

“Gypsy is part of my family. It’s like losing a child.”

When Lode first started buying ads to help find Gypsy, the reward was $100, no questions asked. Now, thanks to the generosity of friends and strangers, it’s up to $2,000.

But Lode says she doesn’t necessarily need to have her dog back; she just wants to know where Gypsy is, see her again and be assured that the dog is safe and happy.