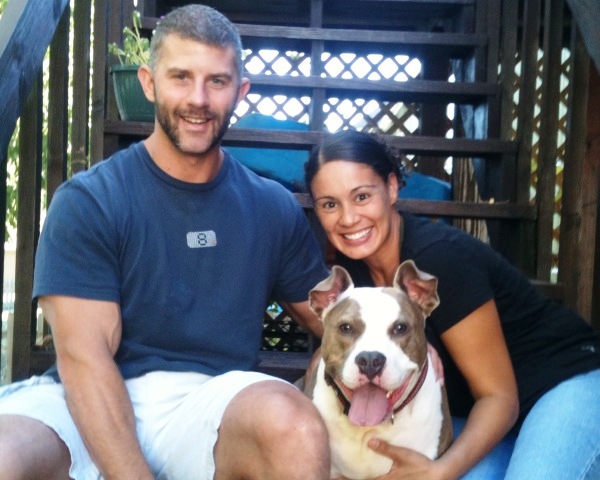 I don’t know if you remember me or not, but you dropped me off at boot camp a little more than a month ago (ok, well only 6 days if you’re a human)! My time here has been eventful to say the least……I’m so glad to be out of that kennel! Since you never came back for me, I decided to stick around to see what this new place had to offer.

Sunday evening I had my first full night’s sleep in a comfy bed that I don’t have to share with any other dogs.

The next afternoon, dad was home, and we were playing. He said he and mommy worked only half a day all week so I wouldn’t be scared in my new place…..but just between you and me, I wasn’t scared one bit!
I got to help mommy again, by carrying some of her Tupperware up to the kitchen……her hands were full and I knew it would be worth some awesome brownie points.

That night dad said if I was going to stay, I had to get on a program. A WHAT? I don’t even know what a program is…….next thing I know my dad has me on a scale. I’m like…..who cares what kind of shape I’m in……ROUND is a shape! Dad told mom, “he weighs 65lbs”……like I couldn’t hear him, how embarrassing! From that point on I have been taking walks twice a day. I even tried running with mom, but I’m so fat it’s really more of a wobble. The good news is, I’ve already lost a pound…..so I won’t be pudgy for long!
Oh did I mention we had a Christmas the other day…..? I know, I know Christmas isn’t until December, but I got gifts galore the other day! Check me out with my first rawhide and rope toy. Mommy & Daddy love me, huh?

Lately I have been working on some basic obedience along with my fitness goals…..mainly its comprised of chasing sticks, but I do well at “Heel”, “Sit”, and am currently trying my paw at “Shake” & “Stay”.
Yesterday, I met Izzy, a hound dog/lab next door. You won’t believe it, she’s a rescue too! After our greeting she started barking, mommy says she does that a lot. We get along fine I guess, but I think she’s as annoying as my Humans said she was. I also got to meet Buster. He’s a Jack Russell….. I asked him to come over, but mommy says absolutely no dogs under the fence. Oh well, I still have a nice yard, huh?

Last night I had an accident……..Dad was disappointed in me, he says I’ve been doing so well all week. I suppose I wasn’t thinking about it, and it just slipped. So after being scolded and put outside, I played cute……I think it worked in my favor!

Nicole……you’re not gonna believe what happened today! I was invited to go on the yacht! Ok, ok…..so its not a yacht……but I’ve never been on a boat before. I told my dad, and he assured me I had nothing to worry about. We would have had an awesome time on the high seas…….I even practiced my Gilligan impression, but that darn boat had some trouble starting. Dad worked on it at the lake for a whole hour with no success…..he said it was the something switch, no… no, the transfer relay, no that’s not it either….oh yea, it’s the starter solenoid! I don’t even know what that is, but he says we’ll sail the high seas next weekend!

Anyway….I’ve barked in your ear enough……tell all the pups at INCREDIBULLS that all the neighbors say that I’m the best looking dog in the subdivision……..but we already knew that huh!

Hatch has a foster home!
Scroll to top